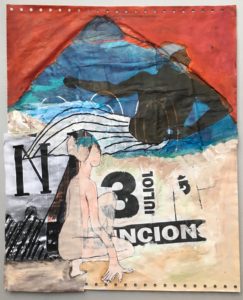 »o.T.«, 2004, mixed media, paper, ink, watercolors and glue, 28 x 21 cm
I see my art as a tool to explore the world, I live in to reveal and formulate in pictures. Generally my art working based on processes.

Main topic of this work and all the others about 50 pieces of works this series from 2004 are human being in context of modern life. Through using collages of poster scraps with text fragments on it, these figures were penetrated to indicate our present live.

All pieces of this series are done at second-hand print paper of computer printer from University Frankfurt, the same size in mixed media technique. I used scraps of posters found in Barcelona Spain and Berlin Germany, ink, watercolors and glue. All figures of this series are quotations of own female life drawings and men of Greek ancient paintings.

My idea was, to join together man of ancient world, woman of present life, science, politics, European countries and text-fragments. That means past and present put into connection. It seems to me as a symbol our European history and culture.

This selected work shows a couple of quotation a nude female model of my own life drawing at Jamaica School of Art with quotation a male figure of painting from grave of diver poseidon temple and fragments of posters from Barcelona and Watercolor.