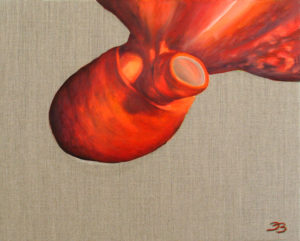 Is there a specific reason or occasion why this eight – and multi-armed, slippery creature has been accompanying me for so long?

The octopus is an extremely interesting creature. It is considered intelligent and versatile. Octopods have three hearts and nine brains. These facts alone were enough for me to regard this miracle of evolution as an artistic research topic.

Octopods usually have a strange, mysterious and sometimes eerie effect on us humans due to their appearance. In art history there are numerous representatives who dealt with octopus and co, who gave posterity pictures and reading. Human abysses were then as now projected onto these animals, defaming them into monsters of the deep sea or aliens of the oceans.

Very few people experience octopods in their natural environment, the underwater world, i.e. they know only a fraction of this animal. Outside of the water the aesthetics of the octopus is not recognized and feels disgusting as a »goo pile« for most people. But if you are lucky enough to observe an octopus in its habitat, you may discover something wonderful. Perhaps you will experience its sublime hovering, the changing colour of its skin, its incredibly sophisticated camouflage manoeuvres, its curiosity or learn about its passion for collecting.

People who have a sense of wanting to occupy themselves with this being are given a gift and conquer their superficiality. Instead of judging too quickly and doing »omniscient«, they succeed in establishing a relationship with this creature. At this point the animal becomes a worthy subject and not just prey.

I have learned that superficiality, disinterest, fear and egoism lead to a kind of rejection and sometimes brutal actions towards the animal, which has the same cause as the rejection of other people or peoples.

»What I do not know is not recognized and not respected and if necessary fought against. What is alien frightens and is rejected and excluded.«

This seems to be a simple life motto, but it is superficial, unfair and goes hand in hand with double standards.

How do the inhabitants of the coastal areas see this?

There, octopus is an integral part of the menu.

Do we humans finally have to get off our high horse and accept to fit in with the animal kingdom?

The trend is there.

»There are animals and animals who think they are not animals and the former have to suffer at the hands of the latter.« (R.D. Precht)