Skip to content
»Angel of History, or the deformation of the line«
Steffen Merte 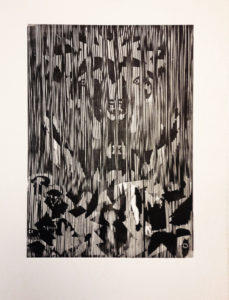 I would like to explain woodcuts from my series »Angel of History, or the deformation of the line«.

This refers to a picture of Paul Klee, owned by Walter Benjamin and based on which he has written the

metaphor of the »angel of history«. The series consists of six individual sheets that I have combined

with each other and currently consists of 31 variants.